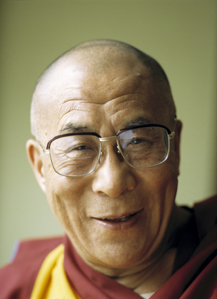 The Dalai Lama held four days of talks and lectures in Glasgow from 29 May until 1 June 2004. The Scottish Exhibition and Convention Centre (SECC) played host to the Nobel Peace Prize winner as he shared his Buddhist wisdom with thousands.

Please follow this link where you can download the 'Root Text and Prayers' for the teachings
and see an audio stream of His Holiness' talk.

"I am convinced that human nature is basically gentle, not aggressive. And every one of us has a responsibility to act as if all our thoughts, words, and deeds matter. For, really, they do. Our lives have both purpose and meaning."

"Compassion is what makes our lives meaningful. It is the source of all lasting happiness and joy. And it is the foundation of a good heart, the heart of one who acts out of a desire to help others. Through kindness, through affection, through honesty, through truth and justice toward all others we ensure our own benefit. This is not a matter for complicated theorizing. It is a matter of common sense.

From: Ethics for the New Millenium His Holiness the Dalai Lama, Riverhead Books, 1999

Interview with Dalai Lama, by Robert Thurman - May 2001

R.T. Now for a really simple question: What is the essence of Buddhism?

Respect all forms of life, and then compassion and affection toward all sentient beings, with the understanding that everything is interdependent - so my happiness and suffering, my well-being, very much have to do with others'.

R.T. - What prevents people from understanding this?

When people think it's all about doing tantric visualizations and rituals.

When I talk about the Buddhist dharma, I'm not talking about just chanting and rituals. If it's thought to be a philosophy, it's not that, either. The dharma, it's just the mind. I'm afraid that among the Tibetans, the Chinese and also some Westerners - the new Buddhists - in many cases they consider the practice of Buddhism is simply to recite something and perform some ritual, putting false expectations on the esoteric magic of tantra: "Oh, if I do this, I may get something amazing!" So they neglect the basic instruments that actually transform our mind. These instruments are the altruistic spirit of enlightenment [bodhichitta], the transcendent attitude, renunciation, the realization of impermanence, the wisdom of selflessness. People who think they have a magic gimmick neglect these things. So their inner world, their inner reality, remains very raw.

Sadly, use of ritual can feed that neglect. Knowledge of philosophy can also feed that. It's a great tragedy. If Buddha came here, if Nagarjuna [a great Indian Buddhist philosopher, circa the second century C.E.] came here, I think they would feel very critical about this; they would give us a big scolding. Nagarjuna would say that all our complex philosophies are not meant just for academics, our elegant rituals are not just for theatrics.

What about those who think Buddhism is simply an unfair rejection of the world? Even today, the pope thinks Buddhism is too depressing and negative.

Most importantly, those people who consider themselves Buddhists must practice the Buddha's dharma sincerely - that will be the proof of the value of Buddhism. Some Tibetans today also say that in the past, the way of life was that the dharma almost served as a livelihood or a routine profession. The Buddhist was not thinking of nirvana, not caring for liberation, just how to make a living. Officials used it for their lives, monks, nuns and lamas for their lives. Inside, in their inner world, they were like ordinary people, lusting and hating. So the dharma became a poison in this way.

When there is too much focus on the Buddhist institution, and the country goes to waste, that's what it means when people say Buddhism ruined the country. According to that reality, these accusations become true.

Therefore, the best answer for this criticism is for ourselves to practice sincerely. We can aim for nirvana and Buddhahood. But in the meantime, we can be practical, develop the education field and improve the worldly life in various ways to benefit society and humanity. In this way, we can be fully engaged.

Are there particular dharma teachings that are especially useful for people at different ages -for example, for younger people filled with turbulent emotions or for older people worrying about death?

I don't think so. Buddha dharma is dealing with emotions. Young and old, the emotional world is the same. Some feelings closely associated with the physical body may differ in emphasis.

Then would you say that young persons benefit from meditating about death as much as older persons do?

Yes, in general. However, just to think about death alone, don't know how useful it is. For a materialist who doesn't believe in future life, meditating on death might develop a bit more contentment, but it won't bring great benefit. In Buddhism, meditation on death is important in the context of the matter-of-fact expectation of limitless lives and the sense or the possibility to transform our mind while evolving through those lives. The time of this life with liberty and opportunity becomes very important, actually the most precious time; wasting such a lifetime is a great tragedy. So we concentrate and meditate on death and impermanence until we powerfully feel that our precious lives with liberty and opportunity might get wasted if we don't practice. In this case, since through ultimate wisdom yor can attain ultimate freedom and ever, the exalted state or Buddhahood, you are energized by meditating on impermanence and death. Otherwise, just to do it in a materialist context might just make someone feel demoralized. That would be wrong, don't you think? What do you think about the relationship of religion and politics?

A guide to the basic steps of enlightenment, demonstrating how to practise morality, meditation and wisdom. His Holiness, The Dalai Lama provides guidance on mental calm, altruism and compassion, refraining from harm and focusing the mind, together with his more general teachings and wisdom.
(January 2002) Pocket Books; ISBN: 0743427084 (Europe /